the globe is our gold

On our first night before the W-trek in Torres Del Paine, Matt and I decided to head up to the EcoCamp (domes!) to explore and (of course) take photos.

The camp is comprised of an assortment of domes. Most serve as campsites from large suite domes to modest sizes domes that share a bathroom dome, divided into a men’s and women’s room. There are a few massive community domes – one that serves as a “Welcome dome” for reception, and another large group of domes that house a restaurant and communal living spaces. 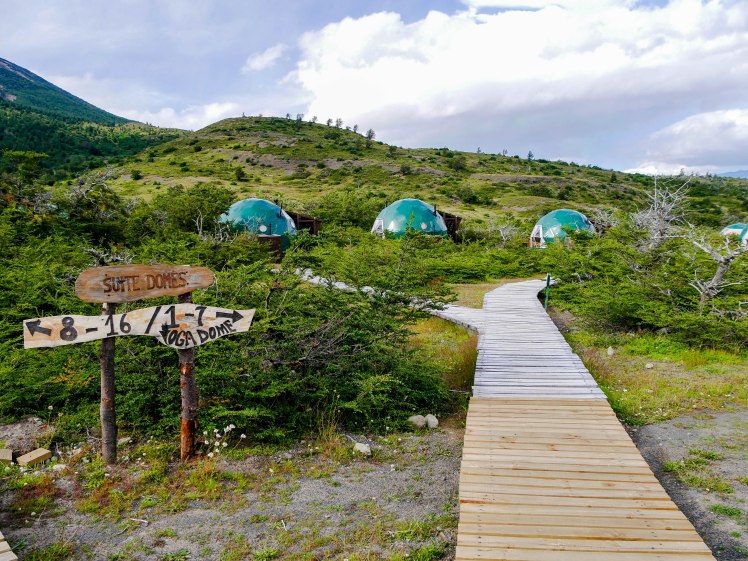 To my pleasant surprise, we stumbled across a yoga dome – a dream come true for any yogi! A sign outside the dome informed us a class was in session and to please not disturb the class, so we continued back through the EcoCamp (after Matt photobombed my yoga dome photo with his best attempt at the pose from our logo).

In the dining dome, we found a chalkboard that displayed the yoga schedule: three hour-long “Morning Stretching” classes that began at 6 a.m. and two “Restorative Yoga” hour-long classes in the evening that began at 6 p.m. 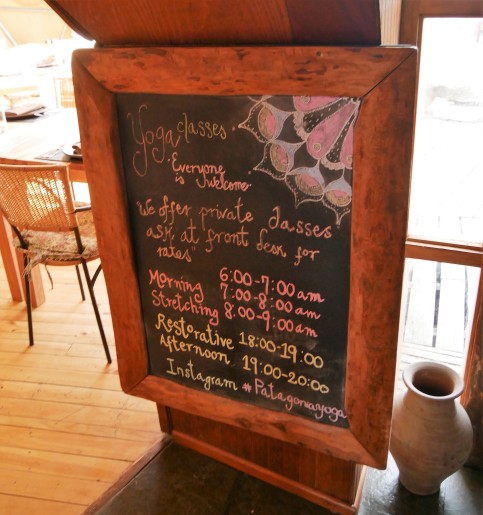 We stopped in the Welcome Dome to ask how much classes were, and were even more excited to learn that they were free! Granted, the receptionist probably believed we were staying at the EcoCamp (I’m assuming most people staying at the camp site or refugios don’t want hike up to the domes after the long and strenuous hikes at Torres Del Paine – but we aren’t most people). We planned to return the next day, either before or after our big hike to Las Torres.

After the first night in our tiny “two person” tent with gale-force winds, pounding rain, and the daunting Las Torres 18 km hike ahead of us, we opted to get the extra hour of sleep and planned to attend the restorative yoga post-trek. We were pleased to find the rain from the night was gone just as we emerged from our tent and lucked out with many sun breaks among the clouds, wind, and rain that Torres Del Paine is known for. The day brought us the most challenging and incredible hike of our lives (read about our 5-day W-trek with all the gory details and photos galore). 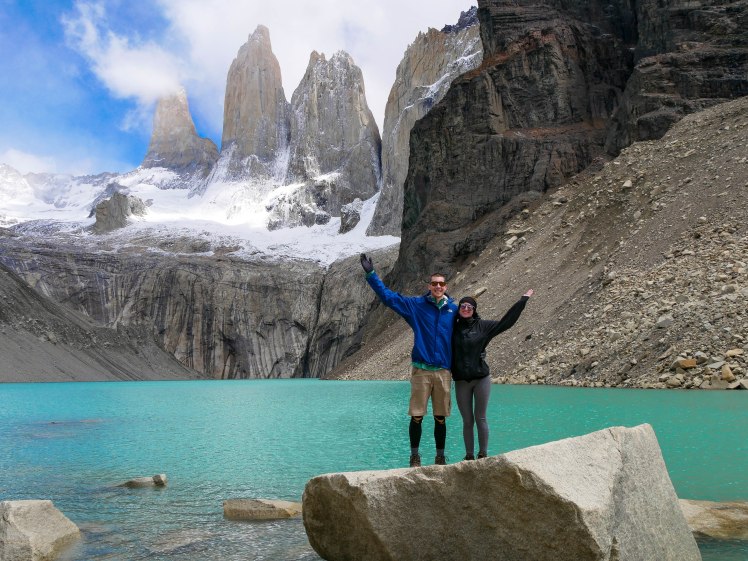 At the end of the trek at Las Torres, snow flurries danced in the fierce wind, sending icy blasts our way. A man who offered to take our photo together joked about how his friend wanted to meditate at the top, but due to the conditions would likely only stay long enough to snap a photo and begin the long descent. We braved the conditions since we were gifted with blue sky above us and a great view of the towers, reveling at the beauty before us. I didn’t get a flow in at the top but I managed to strike a few yoga poses amid the gorgeous backdrop.

The trek back down to our camp was almost equally as difficult as the ascent. I had one goal on my mind on the way down – yoga at the dome! 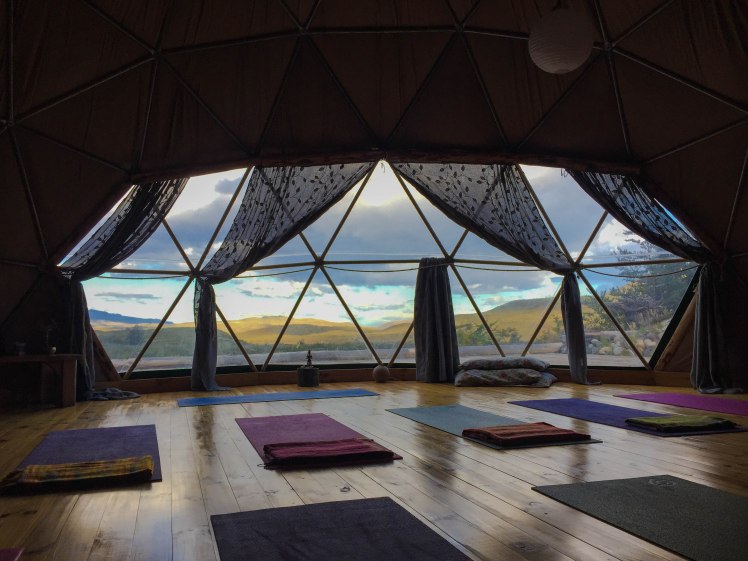 We were exhausted when we finally reached our campsite (after a 9 hour day), but we thankfully had enough time to make the 7 pm class. We quickly changed into yoga gear and made our way up the small hill to the EcoCamp. We waited alone on a bench outside the yoga dome and then watched as roughly 10 people left the dome a little after 7 pm. No one else was waiting for class at seven so we were treated to a private lesson! Again we were surprised, this time to find the class was instructed in English. The room was equipped with over 20 mats, each with a folded blanket, set up neatly on the floor in three rows, facing out a large window with sweeping views into a valley.

The class was exactly what we needed after a long trek – restorative. We spent most of the time on our backs, stomachs, and bums, in poses lying and sitting on the mat, with only a few poses (a short warrior sequence) bringing us to our feet. The sequence was designed for relief and stretching, and targeted our legs, hips, and back. Perfect post trek! 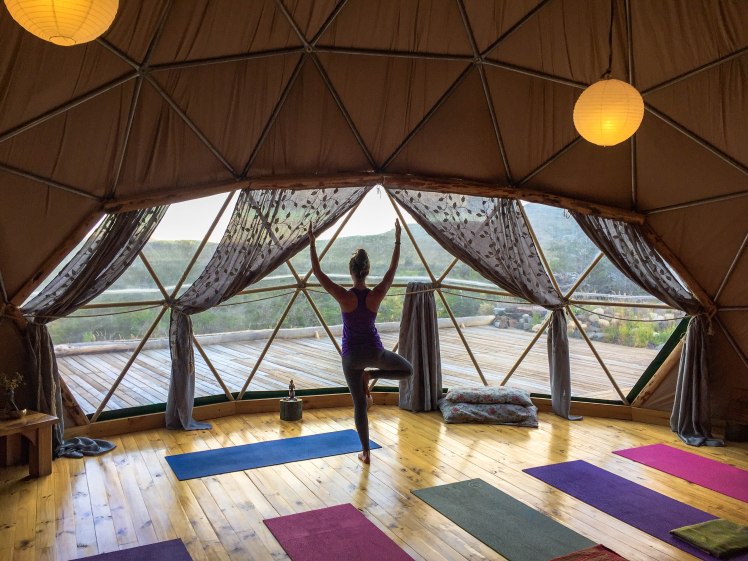 After class we talked to the instructor who was from Northern Chile and found out it was her second season teaching at the domes (what a gig!). She had been teaching yoga for three years. The sequence, described as a “hippie flow” was outlined in a folder in the back of the room. She informed us the dome is also always open, so we could come in anytime to practice when there wasn’t a class. We were headed to a new campsite the next morning so we weren’t able to take advantage of the open yoga dome, but I would have loved to.

We brought towels and a change of clothes to shower in the dome bathrooms (which I definitely recommend, they are much nicer than the ones at the campsite and they had shampoo/conditioner/soap in each shower – score!).

Yogi or not, #PatagoniaYoga is the ultimate place to get your zen on, stretch before a trek or restore afterwards.

This site uses Akismet to reduce spam. Learn how your comment data is processed.